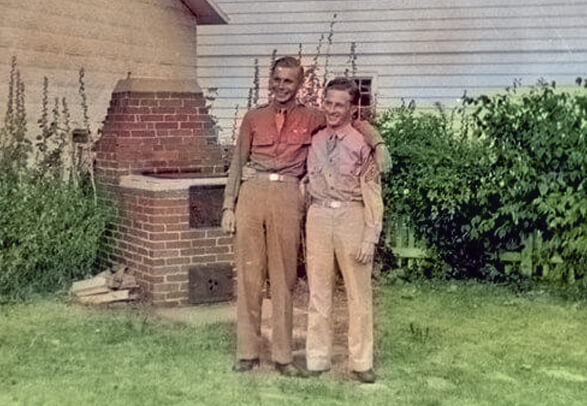 Starting out on Fayette Street

The Celina Wine Store, Inc., is a second-generation, family-owned beverage and food carry-out business that was originally started at 132 W. Fayette Street in downtown Celina, Ohio, by brothers John and Charles Hierholzer in 1946.

Opening at the end of World War II, inventory was limited due to continuing rationing of items such as glass, wheat and sugar, items necessary for the production of beer and soft drinks. The store opened on May 10, with just 5 cases of London Bobby Ale, one case of Pepsi and one case of Coca Cola. In those days, John recalls, due to glass rationing, you had to return an empty bottle in order to buy a bottle of beer. Early sales depended upon wine. Popular varieties were cheap and sweet - muscatel, white port, dark port, sherry and tokay. The few dry wines -- chianti, sauterne and Burgundy, were mostly holiday sales. By the Fall of 1946, the rationing was lifted and the breweries and bottling companies were back to full business. Plenty of beer and soda was available. The business was open seven days a week, and the store offered home delivery service in the Celina area for several years.

In 1955, John and Charles introduced Celina to pizza pie, a new meal and snack food that would quickly spread in popularity across the U.S. over the next decades. Originally started with a small oven and all the fixings from Delco Pizza Products out of Dayton, Ohio, pizza became a major sales product for the Celina Wine Store. The pizza preparation and sales area in the store expanded over the next two decades, affording evening and weekend employment opportunity to the teenaged Hierholzer children.

The store was also the first in town to own an ice making machine, selling packaged ice from a vending machine outside the store for 25 cents a bag. Demand often outstripped supply during the hot summer and holiday weekends.

Charles retired in 1972, about the time that the location on Fayette Street, with its limited parking, was limiting sales. Choosing to find a new location rather than closing the store, John purchased a lot on West Logan Street and built a new building with a drive-through bay. With the new and larger facility, both the beverage and the hot food menu expanded. More coolers meant available space for more beer and soda, and the wine selection expanded with the increased sales and display area.

New kitchen, commissary and food preparation equipment and space meant the introduction of more menu items, including submarine sandwiches, burgers, fries, milkshakes and soft drinks. A small indoor seating area and a walk-up window offered additional food service options. With most of their children grown and gone, John's wife, Katie, was a fixture in the new kitchen during the lunch hour, adding her cooking expertise and pleasant demeanor to the store.

The original philosophy of the Wine Store's food business was to purchase nothing but the best quality ingredients, and to sell at fair prices. That practice continues to the present. 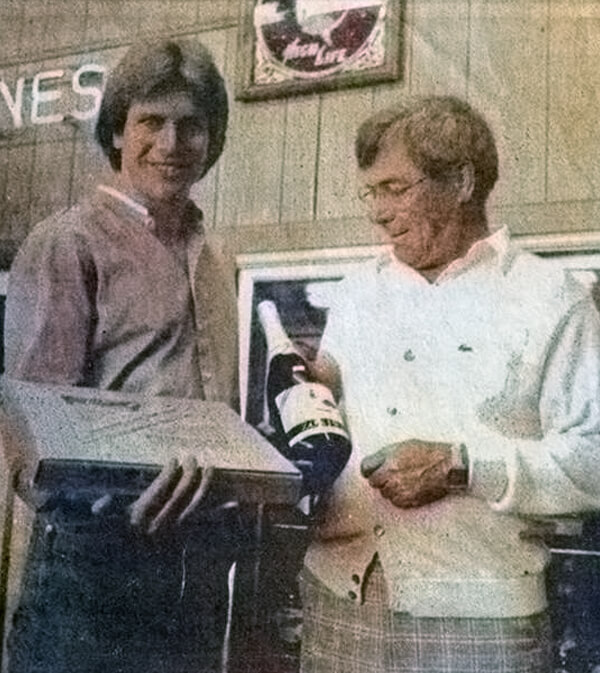 In the mid 1970s, as the business grew, John's sons Mark and Pete joined him at the store. Mark was instrumental in bringing Mexican food to Mercer County when he introduced tacos and burritos to the menu. The new items were a hit with the Wine Store's customers.

John retired from the business in 1977, and Mark Hierholzer assumed managing the day-to-day operations. The business continued to grow, especially the kitchen business. Traffic congestion necessitated the addition of a second drive-through bay, which was completed in the fall of 1979. Also in 1979, when Mark left to pursue other interests, Pete Hierholzer stepped into the management role.

During the 1970s, many key people were hired to help operate the business; many are still with the company today. Celina Wine would not have been successful without them and the other loyal and caring staff members. Veteran employees include Keith Ley, Ron Boess, Mary Kessen, Nancy Gray, Connie Williams and Jay Nisewarner.

The 1980s brought another business expansion when Celina Wine Store, Inc., opened Pullman Bay Restaurant. Many of the menu favorites from the Wine Store were included in the Bay's offerings. Pullman Bay was later sold in 2005.

In 1996, the decision was made to expand into the St. Marys market, and the company purchased BJ's Carryout at 2111 Celina Road. After extensive remodeling, the new Villa Nova Drive Thru opened its doors in March 1996. Villa Nova adopted most of the food menu from Celina Wine and included full delivery for lunch and dinner.

Direct competition came in 2005 when East Bank Carryout opened around the corner on the east end of Grand Lake. East Bank featured a brand new convenience store, a drive-through, kitchen, and BP gasoline. However, the economic recession took its toll on East Bank, and they closed their doors in November 2008. This presented an opportunity for Celina Wine Store, the parent corporation of Villa Nova Drive Thru, to expand into a larger, newer facility.

So in June of 2009, Villa Nova Drive Thru moved around the corner and opened at 182 East Bank Road. The BP gasoline was changed to the Marathon brand, and additional indoor seating was added. Customers would now have the option of dining in and even enjoying a beer or a glass of wine with their meal.

The Celina Wine Store would not have enjoyed the success they have had through the years without great employees. Managers with us today include Nancy Ballinger, Ron Boess, Jay Shinabery, Justin Schulzie, Mike Browder, Bob Hierholzer, John Moore and Cole Hemmelgarn.

A special word of appreciation also goes out to all of our loyal customers from the two counties. Without customers, no business can survive.

Trailer That John's Kids Sold Sno Kones Out Of.

Some Of John's Kids At The Old Wine Store Location (5 Out Of 9).